Thurgood Marshall (July 2, 1908 – January 24, 1993) was an American lawyer who served as Associate Justice of the Supreme Court of the United States from October 1967 until October 1991. Marshall was the Court's first African-American justice. Prior to his judicial service, he successfully argued several cases before the Supreme Court, including Brown v. Board of Education. Born in Baltimore, Maryland, Marshall graduated from the Howard University School of Law in 1933.

He established a private legal practice in Baltimore before founding the NAACP Legal Defense and Educational Fund, where he served as executive director. In that position, he argued several cases before the Supreme Court, including Smith v. Allwright, Shelley v. Kraemer, and Brown v. Board of Education, which held that racial segregation in public education is a violation of the Equal Protection Clause. 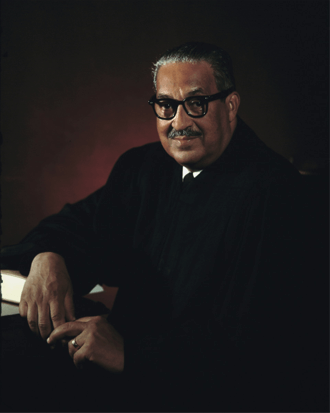