The National Association for the Advancement of Colored People (NAACP) is a civil rights organization in the United States, formed in 1909 as a bi-racial endeavor to advance justice for African Americans by a group including W. E. B. Du Bois, Mary White Ovington, Moorfield Storey and Ida B. Wells. Its mission in the 21st century is "to ensure the political, educational, social, and economic equality of rights of all persons and to eliminate race-based discrimination."

National NAACP initiatives include political lobbying, publicity efforts and litigation strategies developed by its legal team. The group enlarged its mission in the late 20th century by considering issues such as police misconduct, the status of black foreign refugees and questions of economic development. Its name, retained in accordance with tradition, uses the once common term colored people, referring to those with some African ancestry. The NAACP bestows annual awards to African Americans in two categories: Image Awards are for achievement in the arts and entertainment, and Spingarn Medals are for outstanding achievement of any kind. Its headquarters is in Baltimore, Maryland. 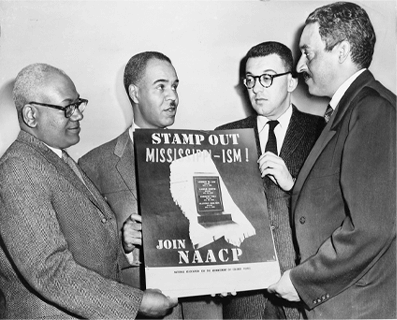