Ida Bell Wells-Barnett (July 16, 1862 – March 25, 1931) was an African-American investigative journalist, educator, and an early leader in the civil rights movement. She was one of the founders of the National Association for the Advancement of Colored People (NAACP). Wells arguably became the most famous black woman in America, during a life that was centered on combating prejudice and violence, who fought for equality for African Americans, especially women.

Born into slavery in Holly Springs, Mississippi, Wells was freed by the Emancipation Proclamation during the American Civil War. At the age of 16, she lost both her parents and her infant brother in the 1878 yellow fever epidemic. She went to work and kept the rest of the family together with the help of her grandmother. Later moving with some of her siblings to Memphis, Tennessee, she found better pay as a teacher. Soon, Wells co-owned and wrote for the Memphis Free Speech and Headlight newspaper. Her reporting covered incidents of racial segregation and inequality. 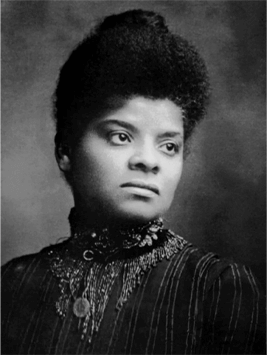