Booker Taliaferro Washington (April 5, 1856–November 14, 1915 was an American educator, author, orator, and adviser to multiple presidents of the United States. Between 1890 and 1915, Washington was the dominant leader in the African American community and of the contemporary black elite. Washington was from the last generation of black American leaders born into slavery and became the leading voice of the former slaves and their descendants. They were newly oppressed in the South by disenfranchisement and the Jim Crow discriminatory laws enacted in the post-Reconstruction Southern states in the late 19th and early 20th centuries.

Washington was a key proponent of African-American businesses and one of the founders of the National Negro Business League. His base was the Tuskegee Institute, a historically black college in Tuskegee, Alabama. As lynchings in the South reached a peak in 1895, Washington gave a speech, known as the "Atlanta compromise", which brought him national fame. He called for black progress through education and entrepreneurship, rather than trying to challenge directly the Jim Crow segregation and the disenfranchisement of black voters in the South. 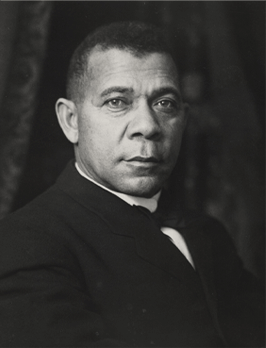